As I had initially conceived (or misconceived) this series of posts on project selection measurements, this post on Internal Rate of Return (IRR) was to represent a climax, during which I’d describe the cleverness of IRR as a selection criteria. Unlike ROI, it incorporates time. Unlike NPV, it considers returns in relation to cost and it does not require the pre-selection of an interest rate. Unlike break-even analysis, it tells us about return, not just risk.

But as I researched IRR, I discovered the extent of its flaws and how it could very well lead to the selection of the wrong project.

Let’s first define IRR. Like Net Present Value (NPV) and the break-even point, IRR is calculated based on a time series cash inflows and outflows. The IRR of a project is the interest rate at which the NPV equals zero. As a CD’s interest rate represents the yield of a CD, the IRR represents the rate of return on money invested in a project. The IRR is usually calculated using an iterative process, trying various values for IRR until NPV equals zero. Of course, Excel makes this easy: http://office.microsoft.com/en-us/excel-help/irr-HP005209146.aspx.

Is a project with a higher IRR necessarily a better choice than a project with a lower IRR? No, not always. In the tables below, Project A has an IRR of 15.10%, and Project B an IRR of only 11.61%. However, Project B, assuming a cost of capital of 7%, returns a higher NPV for the same initial investment. This result occurs because Project B has its payout concentrated at the end, and that payment is discounted using an interest rate that is lower than the IRR. 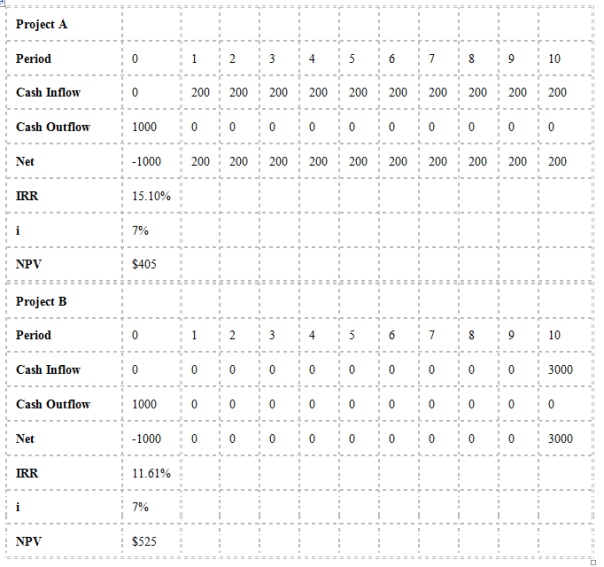 Because of the distortions caused by the re-investment assumption, IRR works best as a means for eliminating projects: any project with an IRR lower than the cost of capital should be eliminated from consideration. However, IRR is not an effective tool for comparing projects; depending on the cost of capital and the pattern of payments (early or late loaded), IRR could very well favor the wrong project.

Another consideration regarding IRR is that because it is expressed as a percentage, it can make smaller projects look more attractive than larger projects, even though the larger project might return a far more substantial NPV.

How important is IRR as an investment decision tool in your organizations? How do you address the distortions?

I'm the Director of Threat Solutions at Shape Security, a top 50 startup defending the world's leading websites and mobile apps against malicious automation. Request our 2017 Credential Spill Report at ShapeSecurity.com to get the big picture of the threats we all face. See my LinkedIn profile at http://www.linkedin.com/in/jamesdowney and follow me on Twitter at http://twitter.com/james_downey.